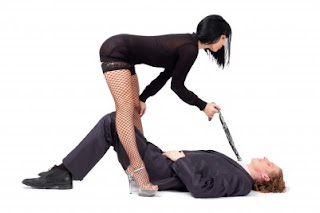 I received an email recently from Stuart, who runs A1 Adult Ebooks. They've always been willing to carry content that's a little more extreme than most, so Stuart is very familiar with credit card processors and their particulars when it comes to sex. He heard the news about Paypal and Mastercard and Visa, and he rejoiced. Finally! He was going to be able to sell all those books the CC processing companies previously refused to pay for!

Except when Stuart contacted Paypal, the representative told him that, no, there had been no recent change in their policy in regards to adult erotic fiction. Incest, according to them, was still banned. He then contacted his credit card processors, and both of them agreed - that "icky" stuff was still not allowed. Just for chucks and giggles, I contacted Paypal as well, and received the same response from the CS rep - still banned. Then I called the guy I'd talked to before - the one who could get a CC processing account for practically anyone - and he, too, was aware of no changes in policy. Still banned.


Now, this could be the case of the left hand doesn't know what the right hand is doing. They're all large companies, so it may take a little time for the word to filter down to the customer service department. That's giving them all the benefit of the doubt. Maybe Stuart and I are asking too much too soon. I hope so.

So if the right hand didn't know what the left hand was doing then... why would that change now? And what good is a policy change, if the actual policy doesn't ever go into effect?
I feel a little like we've been unsegregated... on paper. But I still have to sit at the back of the bus.
I truly hope that's not what's happening. But what's going on at Amazon right now gives me pause and makes me wonder. Can it all just be a coincidence? Yes, I sound like a crazy conspiracy theorist sometimes. But just because you're paranoid...

Oh, what's been happening at Amazon?

Well, for the past few months, Amazon has been filtering more and more erotica titles out of their main search page. This ADULT filter makes books unsearchable from the main/All Department Search page.Which makes some sort of sense - a kid looking for "What to Expect Babysitters Handbook" doesn't want to see my "Babysitting the Baumgartners," right? And their parents definitely don't want them seeing it. Heck, I don't want them seeing it!

And they both come up in the main search. The handbook is first, my book is second. So it makes sense to filter adult titles from the main page, okay, I get that.

What does Amazon say about it? As with the incest banning, Amazon will only refer to their so-vague-as-to-be-useless terms of service instead of being clear and transparent. So far, they won't tell us why certain content is filtered, or what criteria have to be met to keep it from being filtered. Previously, it's been nudity on covers - understandable. But my Modern Wicked Fairy Tale series has no people on the cover, so that's clearly not all the criteria they're using. But who know what it is? Because they're not talking.


I know Amazon doesn't want to be targeted as "censors," and go through what Paypal just did. They'd like to save face, I'm sure. So they're doing all of this secretly and sporadically and arbitrarily. And then denying it. Otherwise it would be clear, and we could call them on it. We certainly can't have that!

So what's the big deal about being "filtered" out of the main search?

Being filtered is a sales-killer. Because not only are you removed from the main page search and relegated only to Kindle Books search - your filtered book will now stop appearing with any UNfiltered books, in terms of recommended reads or also-boughts. Your filtered book also won't appear on any "hot new release" lists either. Your filtered book is now wrapped in plain brown paper and sold at the back of the store.

Amazon knows its biggest strength -- and weapon -- is its search engine, algorithms and rankings/ratings system. They're using it now, hammering erotica writers right out of the top lists. And they're trying to do it without anyone (who matters) catching wind of what's happening.

Is this a form of censorship? Oh boy, here we go again. You know what, I don't care what you call it. It's unfair, any way you look at it. If you're going to have a policy, apply it--clearly, consistently, and fairly. It's very simple.


You you hear that Amazon?

Do you hear that Paypal?

Do you hear that Visa and Mastercard?

Stop being so afraid of sex that you can't even talk about it. You're perfectly willing to profit from it, but you don't want to make policies about it? Ridiculous. And stupid. It's bad business. There isn't anyone in this equation, from reader to writer to customer (in or out of the erotica genre) that doesn't want you to be clear about your policies!


Instead, Paypal pretends to have a policy change - but really doesn't. Visa and Mastercard claim they've sold this stuff all along, no problem - but they lied. Amazon claims they can "filter" whatever they want, whatever they want, willy nilly, without any consistency or fairness.

If these corporations want to be treated like citizens, then they should stand up and be a man about it, instead of slinking around behind the scenes, only making a statement when they're forced to, and then going back on their word. They're wussies. And they're bullies.

And I really hope they prove me wrong.

Even Academics Aren't Immune From Making The Author's Big Mistake...

The Author’s Big Mistake, apparently, is to respond to a bad review. All that happens is the writer makes themselves look foolish and unprofessional. Witness this spectacular meltdown from Jacqueline Howett over a bad review of her self-published book, The Greek Seaman. To compound her misery, this went viral enough to hit the major broadsheets. Even if they say bad things about us writers, the reviewer is meant to be aloof and sacrosanct. Otherwise it’s just a big circle jerk that helps no one.

What if the reviewer is less than honest in their intentions?

A link to another spectacular author meltdown appeared in one of my social networking feeds. This one saw Mike Coe attempt to break the world record for most consecutive comments after a blogpost following Jane Smith’s negative review of his book, Flight to Paradise. A fellow writer had posted the link as a good example of a self-published writer overreacting to reasonable criticism. I thought the same, until I read down to the part that revealed the reviewer had only read four pages.

Four pages! How can anyone seriously review a book after reading only four pages? That’s like writing a review of a movie after seeing only the first three minutes. I’m sure there are many movies where the film critic would have liked to have walked out at the halfway mark, but they can’t, because they’d be violating their role as a critic. I know Smith has clear rules and a ‘fifteen typos and you’re out’ policy, but her review is four paragraphs long and talks about ‘poor characterization’…from a book where she’s read only the first four pages. I’ve read plenty of books where the main characters haven’t even showed up by then! Slamming a book because the writing is so bad it’s painful to turn the page is one thing, but I’d be peeved too if a reviewer read only the first couple of pages of one of my stories and started to comment on broader issues of characterisation and plot (although not enough to attempt to break the world record for most consecutive comments after a blogpost).

I might be wrong, and I’m prepared to apologise whole-heartedly to Jane Smith if this is the case, but after reading more of her reviews my gut feeling is her selfpublishingreview is a troll site with the main aim of beating up self-published writers for the temerity of going it alone. She also runs a blog entitled “How Publishing Really Works”, which sets my ‘ulterior motives’ alarm bells ringing. A bad book is a bad book is a bad book, and this is true whether it was shat out by one of the Big 6 or a lone, misguided scribbler, but some people are vehemently against the whole principle of self-epublishing in general.

I’m sure plenty will keep on submitting to her for review. They’ll see the carcasses of past maulings and think, That won’t happen to me; my book is good. We’re daft like that. I think I’ll pass on this one, though. I don’t see the point when the game is so heavily stacked it’s impossible to win. Or rather, if someone has an axe to grind, the last thing you want to do is give them an axe.

Oh, and to prove it’s not just us crazy self-published types that go apeshit below the line, enjoy Eric Anderson making the Author’s Big Mistake over Catherine Hakim’s review of his latest book in The Guardian.